TxDOT is conducting a refinement study on RM 620 from the Colorado River Bridge to US 183. The purpose of the RM 620 Refinement Study is to further analyze and develop mobility improvements identified in the previous RM 620 Feasibility Study (2017).

In February 2017, TxDOT completed the RM 620 Feasibility Study from US 183 to SH 71 in Travis and Williamson counties. The RM 620 Feasibility Study results found that motorists traveling on RM 620 experience significant traffic-related delays during morning and afternoon peak travel times. The resulting congestion and existing road configuration diminishes safety and hampers efficient mobility. The RM 620 Refinement Study takes a closer look at the corridor from the Colorado River bridge to US 183.

Project Status: RM 620 from the Colorado River Bridge to US 183

RM 620 North, extending 9.8 miles from the Colorado River bridge to US 183, requires additional study before improvements can be made. This segment of RM 620 is currently a four-lane undivided roadway with a continuous center-turn lane. Due to population increase and resulting demand, the segment of RM 620 between RM 2222 to US 183 is anticipated, upon full build out, to need a minimum of 10 lanes.

Roadway configuration considerations may include expanding at ground level, utilizing elevated structures or a combination of both. At its conclusion, this study will recommend a concept for RM 620 to be further evaluated through environmental reviews and additional public and stakeholder engagement.

As part of this study effort, TxDOT will be coordinating with state and local officials from Travis and Williamson Counties as well as the cities of Austin and Cedar Park.

TxDOT had plans to hold two open houses for this project between late April and May 2020. However, due to concerns over COVID-19, these public meetings have been cancelled. The public engagement effort will resume as the project is advanced to NEPA reviews and environmental clearance.

As of April 2020, the refinement study has generated data: 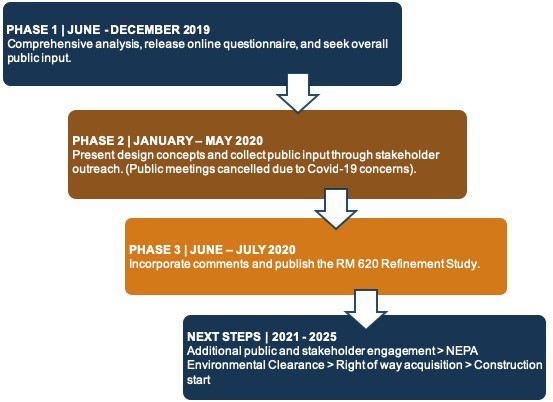