Loop 360 provides primary access to far west Austin, acting as a thoroughfare for residents and as a commuter route for those living and working along the highway and those passing through. It provides access to a major Lake Austin boat ramp as well as Travis County greenbelts. The scenic highway is also a popular recreational bike route.

In 2014, Loop 360 was the 98th most congested road in Texas with over 155,000 annual hours of delay per mile. It is particularly congested during “rush hour,” taking over 60 percent longer to travel during peak travel periods than during normal, free-flow conditions.

From 2014-2016, TxDOT conducted a feasibility study to identify potential improvements on Loop 360 from US 290/SH 71 to North MoPac (Loop 1). The input gathered through these efforts was incorporated into each phase of the study, including the identification of problems and potential solutions, as well as the evaluation, refinement and presentation of solutions.

Learn more about the 2014 feasibility study by visiting the “More Information” section below.

In 2018, TxDOT, in partnership with the city of Austin, began the next phase of work on Loop 360 to improve safety and mobility in the corridor. The program will upgrade intersections along the roadway. These improvements will collectively provide substantial benefits for congestion relief. Visit the Loop 360 program website for more information about the current improvements underway.

TxDOT wants to hear about community needs, concerns and ideas for the future of Loop 360. Information gathered from the community will guide future planning. Participation opportunities include:

The feasibility study took a grassroots approach by involving groups and individuals throughout the community. The purpose of the study was to identify needs and gather ideas and feedback about potential safety and mobility improvements within the Loop 360 corridor. Stakeholders reviewed an array of improvement options to meet rapidly growing traffic demands.

The Loop 360 Improvement Study was conducted using a four-step process that engaged stakeholders on an ongoing basis: 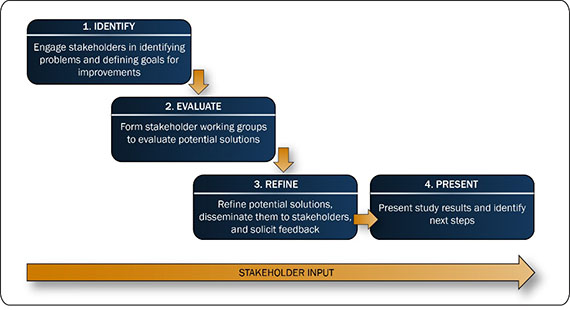 Below are files from the 360 Improvements from Walsh Tarlton to Barton Creek Plaza project.