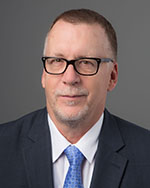 Stanley Swiatek, P.E., is the district engineer for TxDOT's Waco District. He has served in that position since June 1, 2017.

Swiatek earned his bachelor's degree in civil engineering from Penn State University in 1982 and a master’s degree in business administration from the University of Detroit-Mercy in 1989. He became a licensed professional engineer in 1986. He started his TxDOT career in 2012 as Director of Transportation Planning & Development in the Amarillo District. He served as district engineer in the Abilene District for three and a half years, after two years in the consulting arena and an 18-year employment with the Florida Department of Transportation. Prior to FDOT, he worked for 12 years for Asea Brown Boveri in the petrochemical/power plant construction industry.