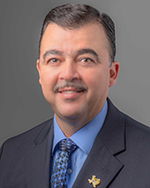 A TxDOT veteran, Alvarez began his career with the department as a conditional grant recipient and worked as a summer employee in 1993 and 1994. Alvarez joined the department full time in 1995 as an engineering assistant at the Pharr District.

From June 2007 to August 2013, Alvarez served as the director of maintenance, where he was responsible for overseeing the district’s maintenance program. Alvarez became the deputy district engineer for the Pharr District in 2013.

Alvarez served as the Laredo district engineer from August 2015 through August 2017.

Alvarez earned a bachelor's degree in civil engineering from the University of Texas at Austin in 1994 and received his professional engineer’s license in 1999.