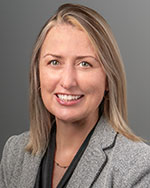 After graduating from Lufkin High School, Kelly earned her bachelor’s degree in civil engineering from Texas A&M University in 1995 and received her license as a professional engineer in 2000.