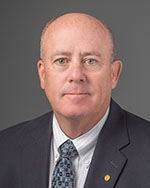 Warren, a Lubbock native and Lubbock High School graduate, began his TxDOT career working as a summer hire for five summers beginning in 1977 and comes from a TxDOT family. His father, Bill Warren, was a 33-year veteran of the Lubbock District as the chief accountant.

Warren received a bachelor’s degree in civil engineering from Texas A&M University in May 1982 and immediately began full-time employment in the Littlefield Area Office. He became licensed as a professional engineer in October 1986. In 1987, he transferred to the Lubbock Area Office as an assistant area engineer, where he began development of the Marsha Sharp Freeway. Warren entered TxDOT’s Master of Science program in civil engineering in 1992 and received his degree from Texas A&M University in 1993.

He was named as the director of transportation planning and development in the Lubbock District in October 1993, overseeing all advance-planning, environmental, right-of-way, utilities and plan development for the Lubbock District. In 2012, he was honored with the Gibb Gilchrist Award in recognition of outstanding service in highway engineering to the state of Texas.