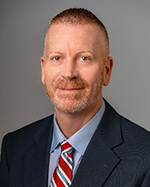 Bohne received his bachelor of science degree in civil engineering from Texas A&M University in 1991. After working several years in the private sector for a consulting firm, he joined TxDOT in the Bryan District in January 1994 as an engineering assistant. He worked on a variety of planning, design and construction projects leading up to his licensure as a professional engineer in July 1996. In March 1999, Bohne became the district planning engineer and later the district design engineer until 2013 when he was selected to be the director of Transportation Planning and Development. In November 2017, he became the deputy district engineer for the Bryan District. In his 28 year career with TxDOT, Chad has helped develop the rapidly growing Bryan District and has also done excellent work as the District Engineer for the Beaumont District.