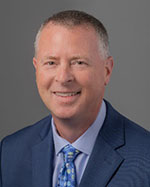 From 2011 to 2019, Ferguson served as district engineer in Beaumont, where he worked with district transportation partners to expand many interstate and US highways, easing congestion and improving safety in the region. He also led the response and recovery efforts in the aftermath of Tropical Storm Harvey in 2017.

Prior to joining TxDOT, Ferguson served in a variety of engineering positions over a 22-year career at the Pennsylvania Department of Transportation, including serving as a district engineer in the Harrisburg and Allentown districts, as well as the director of the bureau of construction and materials from 2004 through 2008, and as the director of maintenance and operations in 2006 through 2007. Early in his career, Ferguson was a design engineer and construction inspector for two Pennsylvania private-sector consulting companies.

Ferguson is a graduate of the University of Pittsburgh-Johnstown, where he received his bachelor’s degree in civil engineering technology in 1988. He is a registered professional engineer in Texas and in Pennsylvania, and has served on numerous American Association of State Highway and Transportation Officials technical committees and task forces.