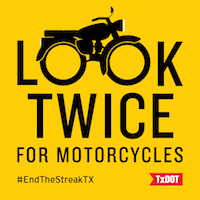 Why should drivers be aware of motorcyclists when traveling Texas roads?

On average, one motorcyclist dies in a crash on Texas roads every day. In 2021, 519 riders lost their lives and 2,318 were seriously injured in crashes. More than half of fatal motorcycle crashes result from collisions with other vehicles.  Drivers simply don’t see the motorcycle or misjudge its distance and speed. The small size of motorcycles can make them appear farther away when they're actually closer. The combination of congested roadways, distracted driving and the difficulty of seeing motorcycles in traffic has led to many preventable fatalities each year.

What are some tips for safely sharing the road with motorcycles?