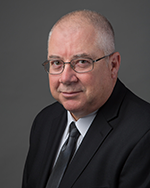 Dalton Pratt is director of TxDOT’s Fleet Operations Division. In this role, he oversees a fleet of 12,500 assets valued at $639 million.

Previously at TxDOT, Pratt has served as a regional fleet manager, special projects coordinator and internal auditor in the agency’s Dallas District office.

Prior to his career at TxDOT, Pratt served 29 years in the United States Air Force, where he oversaw several major fleet programs. He graduated with honors from Southern Illinois University with a Bachelor of Science degree in workforce education and development.