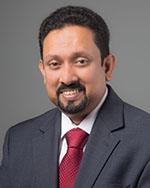 Prior to joining TxDOT, Paramanantham worked with the Sherman-Denison MPO as a transportation planner.

Paramanantham graduated from National Institute of Technology in 1990 with a bachelor’s degree in civil engineering and from Lamar University in 1993 with a master’s degree in structural engineering.