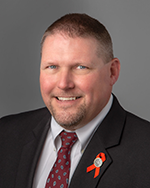 Jere A. “Buddy” Williams, P.E., is the district engineer for TxDOT's Atlanta District.

Williams started his career with TxDOT in 1987 as a summer intern for the Clarksville Maintenance Section and later served as a summer engineering intern in the Paris desidency in the Paris District. After earning his Bachelor’s Degree in civil engineering from Texas A&M University in May 1990, he accepted a full-time position in the Atlanta District’s Texarkana Area Office, where he obtained his P.E. license and was named assistant area engineer.