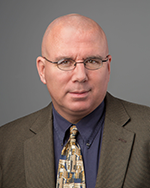 Brian R. Barth is the Deputy Executive Director for Program Delivery for the Texas Department of Transportation (TxDOT), responsible for overseeing all program and project delivery for the Department.

A member of the TxDOT family since 1988, Barth began his career as an engineering assistant in the Dallas District. In 2003, he was appointed as the Dallas District’s director of transportation planning and development. From 2009 to 2013, he served as the Fort Worth District’s deputy district engineer, providing joint oversight and development of the DFW Connector, North Tarrant Express, I-35W, I-30 and Chisholm Trail Parkway.

In November 2013, Barth was appointed as Fort Worth district engineer and served on the Regional Transportation Council of the North Central Texas Council of Governments working to solve Metroplex-area transportation issues. In that role, he also oversaw over $1 billion in construction work each year in addition to major projects on I-35W, SH 360 South and the I-30/SH 360 Interchange.

Barth graduated from the University of Texas at Austin with a bachelor’s degree in civil engineering.