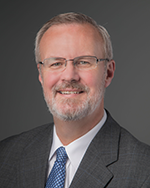 James M. Bass serves as executive director of the Texas Department of Transportation and is honored to work with the women and men of TxDOT to enhance the quality of life for Texans by delivering on our Mission.

Bass began his TxDOT career in 1985 working summers in the Fort Worth District. He worked part-time as an engineering aide in the Austin District's South Travis/Hays County Area Office while earning his bachelor's degree in accounting at the University of Texas at Austin.

Bass was selected as finance division director in November 1999, and became chief financial officer in 2005. He became executive director in January of 2016.