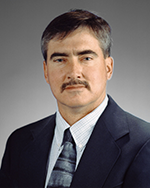 In this role, he is responsible for management and control of the Engineering & Safety Operations, District Operations, Project Planning & Development divisions, and transportation programming and delivery for TxDOT.