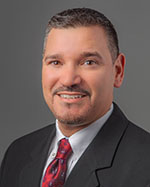 Olivarez began his career with TxDOT’s Pharr District in 1999, where he worked at the Pharr Area Office in various capacities including Area Engineer of Hidalgo county. In 2014, Olivarez was hired by TxDOT’s Corpus Christi District as the director of operations and charged with overseeing construction, maintenance and traffic operations for the department’s 10-county district. Olivarez was later hired as Corpus Christi’s deputy district engineer in June 2015, where he also served as the project manager for the Harbor Bridge Project, a $1 Billion design build project in Corpus Christi. Olivarez was hired to his current role as district engineer in September 2018.

Olivarez graduated from Texas A&M University-Kingsville in 1999 with a Bachelor of Science degree in civil engineering and became a licensed professional engineer in June 2004.