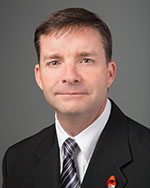 Under the direction of the Chief Engineer, Simmons oversees and coordinates TxDOT’s engineering operations.

A 27-year TxDOT veteran, Simmons officially began his career with TxDOT in 1994 in the Atlanta District’s Design Office (after working three summers in the Atlanta Area Office). Through the Young Engineers’ Rotation Program, Lance also worked in the Advance Planning, Traffic and Atlanta Area Offices.  From 2001 to 2009, Lance served as the Atlanta District’s Bridge/Special Projects Engineer before being selected as its Director of Operations in 2010.  He was named district engineer in the Bryan District in March 2015.

In 2014, Simmons was honored with the 2014 Luther DeBerry Award at the Transportation Short Course.

As a Terry Scholar at Texas A&M University, he earned his bachelor's degree in Civil Engineering in 1994.